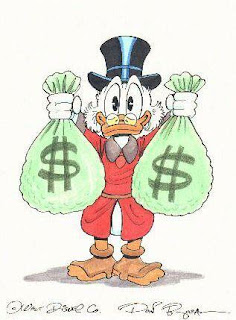 The below the fold blog post was from last month where you will see a agenda item being postponed till next month which is now. We see in this week's current agenda with attachments  for the City of Greensboro where item #20 had this to say in BOLD WORDS

Resolution authorizing Economic Development Incentive Grant and Loan, not to exceed the amnount of $4,176,775 in total, to Land Port Investments, LLC. to be funded by appropriating up to $4,176,775 of voter approved Economic Development Bond funds. (no attachment) This item was postponed from the 9/13 meeting of Council without further advertising. COUNCIL IS BEING REQUESTED TO REMOVE THE ITEM FROM THE AGENDA TO BE READVERTISED FOR A PUBLIC HEARING AT A LATER DATE.

There are so many angles to look at this situation and the most obvious is to wonder if we will see as reported below the fold our local Crony Capitalist Roy Carroll will give campaign money to plenty of our local elected officials and some who are vying for a seat in the upcoming eleactions knowing that this item has been brought up in front of the Greensboro City Council last month and now will get readvertised at a later date probably once the new Greensboro City Council gets sworn in.

It is not illegal to give campaign contributions to local elected officials even when you have business in front of the city but it sure is unethical to see this happening on a local level. We should have a rule that if you do business with the city or have contracts with the city or county then you will be barred from any contributions for a 2 year period before and after the item comes in front of the elected officials.

Will we see the local Greensboro News and Record do any reporting of this situation?
Do situations like this right before a municipal election raise questions?
Could we see any new laws barring campaign contributions from people who have business with local municipalities?

We will see where this goes but it is interesting to see them after a month take this item off the agenda for good and hopefully not put any more money in local developer Roy Carroll's pockets.

Resolution authorizing Economic Development Incentive Grant and Loan, not to exceed the amount of $4,176,775 in total, to Land Port Investments LLC to be funded by appropriating uo to $4,176,775 of voter approved Economic Development Bond funds. (no attachment) COUNCIL IS BEING REQUESTED TO POSTPONE THIS ITEM UNTIL OCTOBER 4, 2011 MEETING OF COUNCIL< WITHOUT FURTHER ADVERTISING.

So who is Land Port Investments LLC? CLICKHERE none other than our Guilford County CRONY CAPITALIST Roy Carroll.

To see a history of what has transpired in the past in regards to our CRONY CAPITALIST Roy Carroll this post on TRIADWATCH will help with a title Crony Capitalism and Local Developer Roy Carroll Red Flags on this American Express Incentive Deal More Info. and Repost   CLICKHERE

One major aspect of this item in front of the Greensboro City Council at this time is that Developer Roy Carroll likes to throw around his influence in regards to local elections which usually turn into $1,000 campaign contributions to local politicians already on council and some who are trying to get on council. Will we see Roy Carroll doling out his money to the local candidates right before they vote on this issue? Is this legal? or Ethical?

Back in 2007 we had Developer Roy Carroll form a Political Action Committee called "North Carolinians for Leadership in Government" here is that post Roy Carroll + PAC = Greensboro City Council , he has since disbanded the PAC and started giving himself.

Then this past election in Greensboro a few years ago the campaign contributions were off a little with $250 contributions to Jim Kee ,Dr. Trudy Wade,Robbie Perkins and also help from his wife Vanessa with some $100 contributions as well.

Now we see that Roy Carroll is back in business with seeing a contribution to at large Greensboro City Council candidate Cyndy Hayworth for $1,000 on 5-27-2011.

What will we see from our local Crony Capitalist Developer Roy Carroll in the next month will he give contributions to sitting local elected officials knowing full well this item will come up in front of the Greensboro City Council. Or will we see the back door contribution where it will not be reported till after the election is over .

This is the kind of situation that reeks of ethical issues and should be regulated by our state laws because in other states like Virginia we have this post on Triadwatch "Loundon County Virginia Bars Developers Campaign $, Guilford County Local Politicians Let's Try This ".

Let me also add this post on Triadwatch titled  "Greensboro Taxpayers Get Ready for a Shovel Ready Your Money To a Secret Developer, Can I Guess Our Local Crony Capitalist"

in the post i stated this back on May 23, 2011
"In the local section of Greensboro News and Record which is behind the pay wall so no links to article that on May 22, 2011 Donald Patterson has a article with a title " City Weighs shovel-ready site".

We learn from the article that in the next few weeks the Greensboro Ecomonic Development Alliance with chairman Dan Lynch with the help from Andy Scott assistant City Manager are wanting to have a shovel ready 100 acre site available to prospect for future tenants. Some of the proposal could be paid for with money from the economic bond approved in 2006.

Here is the kicker from the article:

Under the proposal a developer would provide the land and the city would get water and sewer in place in addition to clearing, rough grading and erosion control. The developer also would have to agree to certain restrictions on the property, such as not sub dividing it.

Local officials would not identify any potential developers or sites. "All that will be known when we go to council"Lynch said. That will be part of detailed proposal.


Can anyone guess who this proposal is geared toward? Could it be our local Crony Capitalist Roy Carroll? or Maybe the Crony Capitalist partner out in Rock Creek Center in Dick Beard who is Greensboro Coliseum Director Matt Brown's Head Cheerleader.

This whole idea smells like the American Express Data Center and Roy Carroll wants some back door incentives to pay for water and sewer to the development. I could be wrong on this one but i smell a rat in the making. We will see what the Greensboro Economic Development Alliance proposal is to the Greensboro City Council but hopefully we will not be hearing Roy Carroll's name on this one.

We heard for the longest time that American Expess was not wanting incentives to open up this data center but then we really know why they did not want the incentives because 6 months later they are in the process of closing a major customer service center out near the airport where more than 1,500 jobs would be moving out of the state to other centers occupied by American Express.How would it look for American Express to shut down and leave 1,500 workers out of a job but then have millions in economic incentive money coming to a data center that will employ at best 60 people.

It is always BS to hear these blowhards spewing out these no name companies that were going to locate in guilford county but the site wasn't available.

Hey Dan Lynch you would have more credibility if you didn't get quoted in paper with this:

"Lynch said one company recently came looking for a 200 acre site." They are still looking" he said when asked for details " That's all I can say"

Can't wait for this dog and pony show in front of the Greensboro City Council, with the head cheerleaders in the Greensboro News and Record following in tow.