ROBBIE PERKINS AND ROY CARROLL TEXT MESSAGING EACH OTHER 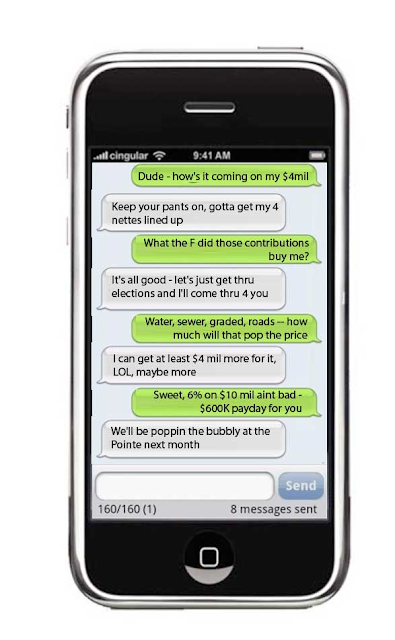 The above parody is fictitious
but we need to remember that we did have sitting council member Robbie Perkins
text message to China local developer Roy Carroll
during a council meeting  in regards to a issue with property off of horse pen creek road,
texts are below .

Rumor has it that Roy Carroll is going to bring up the 4 million dollars
for water and sewer in January 2012
that has been tabled from the City of Greensboro agenda.

The report below is from December of 2009

Above you will see the text messages from Greensboro City Council member Robbie Perkins to local developer Roy Carroll. During council meeting on December 15, 2009 it was discovered that Robbie Perkins was texting back and forth to Roy Carroll about a situation involving a court case which is totally a separate issue and a condemnation of Kotis properties to put in water and sewer to Roy Carroll's property off of horse pen creek road.

The first issue that needs to be addressed is should council members be text messaging during council meetings? The answer should be NO because the council members need to be concentrating on who is speaking to them and the case in front of them and not text messaging their friends or in Robbie Perkins case your TREBIC which stands for the Triad Real Estate and Building Industry Coalition buddy.

The second issue is to see if Greensboro City Council member Robbie Perkins is also Roy Carroll's leasing agent for this property off of horse pen creek road? If Yes ,then the councilman needs to recuse himself from yet another case that comes in front of the City of Greensboro. Here is a post from the past where both Robbie Perkins and Roy Carroll are tied together CLICKHERE on the center city pointe in downtown Greensboro.

To understand the above text messages in the first text message it talks about a person by the name of winfree, that happens to be Kotis Properties lawyer in Chick Winfree. The third text says that is has been tabled till January 5, 2010.In the fourth text it states that "Al" has been giving me the play by play. Al is probably, Al Leonard who is Vice President Carroll Commercial Construction Company and Carrolland Company.And the last text seems like Robbie Perkins saying to Roy Carroll to go toe to toe with Kotis Properties. The "Terry" in the last text is Greensboro City Attorney Terry Wood.