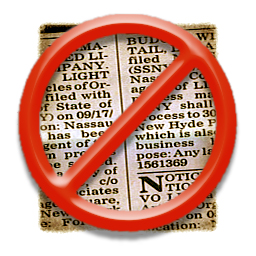 This is a update to this story below where at tonight's  Guilford County Commissioners Meeting 4-3-2014, the commissioners had the manager to a RFP which is a request for proposal to get the lowest bid to show the tax delinquency bill for the citizens of Guilford County . In the past this bill was $86,740.29 from a post I did on May 1, 2011 CLICKHERE . The request brought in proposals from Jamestown News circulation 5,000, Greensboro News and Record circulation 54,000, and Carolina Peacemaker circulation 6,000. The lowest bidder won with Jamestown News coming in at 41 cents per listing at a cost of $5,945 which was reported from Joe Killian at News and Record on his facebook account.

This is a great step for the citizens of Guilford County and hopefully we will see a change on the state level to modernize public notice laws to 2014 standards not 1949. County Commissioners go from $86,000 down to $5954 as savings of $80,000.

Below is the report from a few weeks ago on this issue at Rhino Times.

in the article were some interesting tidbits

"However, at a Monday, Feb. 3, Guilford County Tax Committee meeting, the committee decided unanimously to recommend to the Board of Commissioners that the county cease its current process of widely publicizing the names, and instead do the bare minimum required by law."

"Guilford County Tax Director Ben Chavis told the commissioners there was no evidence the mass advertisements of names is effective in getting people to pay up.

Chavis said that from the studies he’s read as well as from his personal experience, putting the names out there for the public to see doesn’t really do much good"

Phillips said he wondered why it has taken so long for commissioners and other county officials to have this discussion, which could clearly save the county money.

“I’m fascinated by the fact that there’s never been an in-depth conversation like we’re having now,” Phillips said."

This blog has been all over this issue since it was brought up to the Guilford County Commissioners last year on January 17, 2013 by me with video starting at the 7 minute mark here is a link

http://guilford.granicus.com/MediaPlayer.php?view_id=2&clip_id=710 note the audio is very low and hard to hear.

Commissioner Phillips has known about this issue for over a year unless he wasn't listening to the speaker from the floor on January 17, 2013 in Keith Brown speaking.

Hopefully we will see some drastic changes in our public notice laws modernize to the year 2014 and this tax delinquency waste of taxpayers money is a start. It is great to see our commissioners understand this and take steps to lower our taxes and what better way then to do away with the tax delinquency notices in 3 publications when the state only allows you to have to provide it in one paid publication.It will be interesting to see a bid process for this item when in reality the only ones in Guilford COunty who can bid on the tax delinquency notice is either Greensboro News and Record, High Point Enterprise or Carolina Peacemaker. Who wants the contract? or will we see Greensboro News and Record cry foul over bidding on this money they were getting in the past totaling close to $80,000

Posted by Triadwatch at 7:57 PM